This chapter will focus on Somatic Symptom Disorder and provide an overview of Illness Anxiety Disorder, Conversion Disorder, Factitious Disorder, and Malingering.

All of the disorders within this chapter share a common feature: there is a presence of somatic symptoms associated with significant distress or impairment with the exception of factitious disorder and malingering.

Oftentimes, individuals with a somatic disorder will present to their primary care physician with their physical complaints. Occasionally, they will be referred to clinical psychologists after an extensive medical evaluation concludes that a medical diagnosis cannot explain their current symptoms. As you will read further, despite their similarities, there are key features among the various disorders that distinguish them from one another.

Individuals with somatic symptom disorder (SSD) often present with multiple somatic symptoms at one time. Individuals with SSD often report excessive thoughts, feelings, or behaviors surrounding their somatic symptoms; thus, leading to distress and/or dysfunction (e.g., missing time from work) (D’Souza and Hooten, 2022). A lack of medical explanation is not needed for a diagnosis of SSD, as it is assumed that the individual’s suffering is authentic. Somatic symptom disorder may be diagnosed when another medical condition is present, as these two diagnoses are not mutually exclusive.

Somatic symptom disorder patients generally present with significant worry about their illness. Because of their negative appraisals, they often fear that their medical status is more serious than it typically is, and high levels of distress are often reported. Oftentimes these patients will “shop” at different physician offices to confirm the seriousness of their symptoms. Anxiety and depression have high comorbidity with somatic symptom disorders.

Conversion disorder occurs when an individual presents with one or more symptoms of voluntary motor or sensory function that are inconsistent with a medical condition (Peeling & Muzio, 2022). Common motor symptoms include weakness or paralysis, abnormal movements (e.g., tremors), and gait abnormalities (i.e., limping). Additionally, sensory symptoms such as altered, reduced, or absent skin sensations, and vision or hearing impairment are also reported in many individuals. The most challenging aspect of conversion disorder is the complex relationship with a medical evaluation. The symptoms are not feigned or controlled by the individual (Peeling & Muzio, 2022). 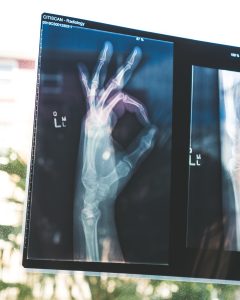 Factitious disorder, commonly referred to as Munchausen syndrome, differs from the three previously discussed somatic disorders in that there is deliberate falsification of medical or psychological symptoms of oneself or another, with the overall intention of deception. While a medical condition may be present, the severity of impairment related to the medical condition is more excessive due to the individual’s need to deceive those around them. Even more alarming is that this disorder is not only observed in the individual leading the deception— it can also be present in another individual, often a child or an individual with a compromised mental status who is not aware of the deception behind their illness (also known as Munchausen by Proxy). Malingering is the feigning of somatic or psychological signs and symptoms driven by external incentives (e.g., criminal charges, financial profit, work avoidance, medications).

Although previously known as psychosomatic disorders, the DSM-5 has identified physical illnesses that are caused or exacerbated by biopsychosocial factors as psychological factors affecting other medical conditions. This disorder is different than all the previously mentioned somatic-related disorders as the primary focus of the disorder is not the mental disorder, but rather the physical disorder. Some examples include:

Below is an overview of a nurse’s consideration for the assessment, problems, and treatment of Somatic Symptom Disorder.

See D’Souza and Hooten (2022) to read more about this topic.

Nurses will assess for three elements:

Problems associated with a Somatic Symptom diagnosis are:

Psychopharmacological interventions are rarely used due to possible side effects and unknown efficacy. Given that these individuals already have a heightened reaction to their physiological symptoms, there is a high likelihood that the side effects of medication would produce more harm than help. May be helpful for those individuals who have comorbid psychological disorders such as depression or anxiety (D’Souza and Hooten, 2022).

You should have learned the following in this section:

MENTAL HEALTH IS A VERB by Jake Bush and Jill Van Der Like is licensed under a Creative Commons Attribution-NonCommercial-ShareAlike 4.0 International License, except where otherwise noted.